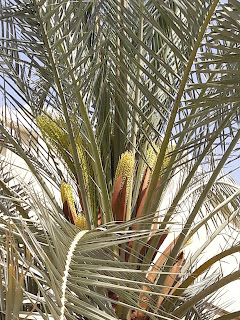 It is Spring in Riyadh. You can see the start of the dates, who will be ready in the Summer.
We trust nature that it will bloom again, that it will give again.

How much do we trust ourselves? 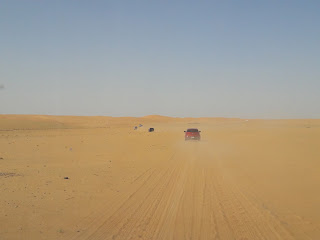 We went to the desert to see falconry. Mr Saif told us that we could do it without a 4 wheel drive.
Jaap was not so sure, but decided to go with our car and:
'go with other people who have one, if necessary'

We were very early at the meeting point.
-for me it is always a sign if you are very early or very late:
it can be that you have no respect for your own time or the time from someone else,
or.....there is something your soul wants to heal or.....is afraid to heal-
When we arrived at the desert,
Jaap didn't like what he saw......
I, on the other hand, trust him completely in the desert:
he knows what he can do with the car and doesn't take unnecessary risks.
The 'farm' was deep in the desert and it was a challenging and....nice drive....
for me....

When we came at the camp, we saw the falcons 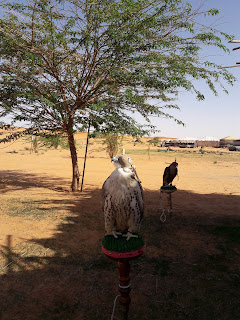 and we had a Arabic welcome:
tea, cardamom coffee and dates 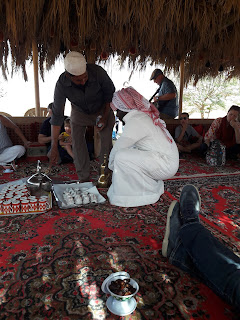 Jaap was happy to be there and.....
had a conversation with Mr Said about 4 wheel drives: were they necessary or not to go to the camp. They didn't agree: he thought it wasn't necessary, Jaap thought it was
- however....he drove through the desert and wasn't stuck......-
He didn't know if he wanted to drive back out of the desert by himself
and asked if someone else would do that for him....
Mr Said would do it, if Jaap didn't feel comfortable.......

It was a lazy afternoon, talking and walking in the desert 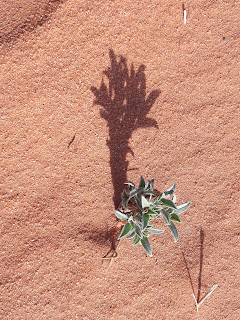 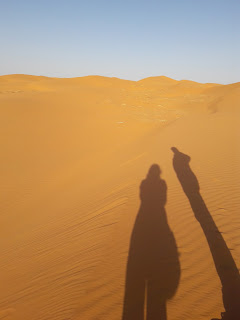 And then you see shadows.....sometimes the shadows are bigger then the original....

At the end of the afternoon we saw the falcon hunt.
The first falcon flew away.....the second wasn't hungry and then there was one who wanted to eat :-)
Mr Said and his crew listened to them, respected them.
They breed them and send them out in nature again, they don't tame them.
Good to see that they want to help keep enough of these animals in nature. 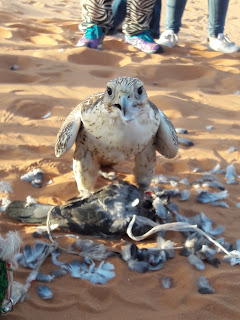 After that we had an Arabic 'lunch' and again 'Kahwa', coffee.
There is a ritual, that when you shake your cup,
you let the person know that you had enough.
Something we knew, but we didn't know why.
It had to do with trust.....
In the old days the men were having coffee when talking politics.
They didn't want the servant to listen in, so they only had deaf servants.
To let them know that they didn't want coffee anymore they shaked there cups,
so they could see it without hearing them.
Trust....

After another hunt the sun went down and.....we had to go back.
'Íf we were by ourselves, we would have stayed in the camp, I want someone else to drive the car
out of the desert.!'
I knew that Jaap could do it and told him that I trusted him more then Mr Said......
while wondering how he didn't trust himself..... 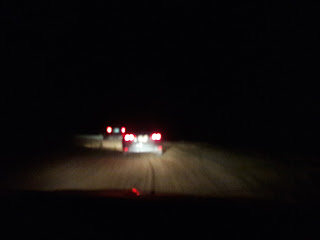 We drove out of the desert....Mr Said was a good guide we trusted him, he knows his way.
There were some challenging parts but none Jaap couldn't deal with.
We knew, that if we would have been stuck,
then there were lot's of cars who could have helped us
but this was not necessary....

How often in our lives are we afraid,
and don't we trust ourselves,
did we forgot how powerful we are..... 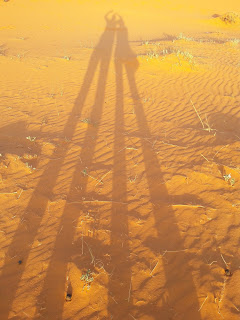 Sometimes your shadow is bigger then yourself and.....
you 'think' that the shadow is you......and that is not true!

Years ago we were stuck in the desert and were afraid we would not come out......
very scary and....
we walked out and were rescued by a watertruck.....
Was there still some shadow there?!?
Probably there was and.....
it was only a shadow....not reality...

We were much younger then
and didn't trust so much in ourselves....more in the 'equipment'.
When that failed, we didn't know what to do....

Now we trust more in ourselves, learned by experiences,
looked at our shadows and....Know each others strengths...
We help each other to look at our shadow
and go back to our strenght.

This month Jupiter and Mercury will go retrograde:
are you ready to look at your shadow?
Do you trust in your power and do you Know you are being guided:
your soul knows.....
do you follow it? Like we dit Mr. Said?
Do you Know you will being helped if necessary....
like alle the 4 wheel drives around us?

If you don't feel your power yet, you will being helped....
Make sure you have positive people around you
that Know how powerful you are.

Remember that even if the shadows seem so big,
those are shadows.....nor the real thing.
Also remember that if you confront your shadow,
you will find your power,
the power that is already inside of you!

Have an amazing month.